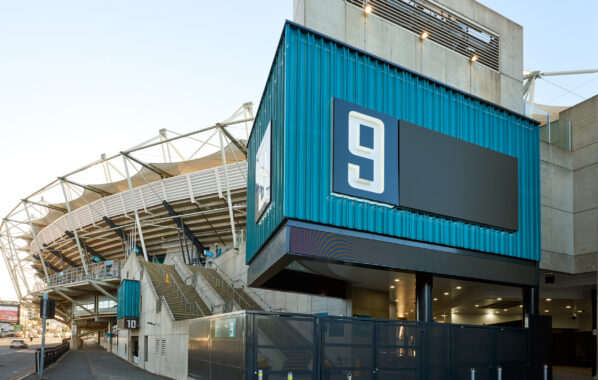 Queensland’s Gabba Stadium has been given an ultramodern $35M upgrade!

Louvreclad were approached at early design stage to assist with the design concept of the new feature perforated aluminium screens proposed for this iconic sports Stadium. Louvreclad’s Director Kelvin Wright met with Karl & David at Populous to discuss project design and planning including material selections and concept design for the proposed light box screens on all the entry gates.

“The main aim of the refurbishment was to improve the fan experience by providing a new overall wayfinding strategy for the venue, modernising of the gate entries and activation of the concourse and public spaces.”  Brayden Goodwin

The design concept called up different colours for each of the gates as a means for people to find their way into the venue and enhance the experience for the fans.  The four specified colours were teal, maroon, yellow and dark blue to reflect the teams that played there.

The three main challenges of this design were, Overall depth between skins, Minimal internal structure holding the outer skin to prevent shadows from the lights. And finally, aesthetically an unbroken line over the 6m height.

After the initial discovery meeting with Populous we were quickly engaged by the head contractor BESIX Watpac to produce some preliminary concept sketches and prototypes so that the concept could get approved in principle by all stakeholders.

At this stage, a 3D model was provided by the structural steel contractor which made it very easy for our design and drafting team to integrate the Louvreclad 3D model of the screens onto the structural substrate. This also allowed us to easily consider the aesthetics of the fixings visually.

Once the smaller prototypes were approved, we were given the go ahead to produce a full-scale prototype so that the lighting could be installed and tested on site to be viewed by all stakeholders with the different profile punched holes to assess to outcome.

There was a lot of discussion around prefabrication and whether we should make the large modules in the factory. However due to the tight site and intricate design, it made more sense to send the curved ribs to site in Meccano kit form which proved to be successful and efficient installation.

BESIX Watpac understands that good coordination between all the sub-contractors is critical to avoid hold ups.  On this job there were quite a few subbies that we needed to coordinate with, Including the lighting specialists, roofers and glaziers and structural steel contractors.  Louvreclad worked well with BESIX Watpac’s project team and well managed coordination led to a smooth delivery and mutually successful outcome.