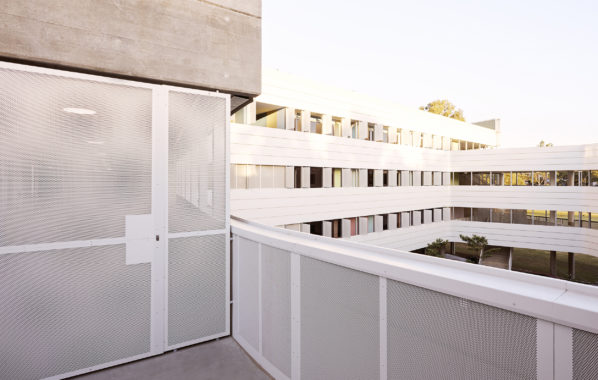 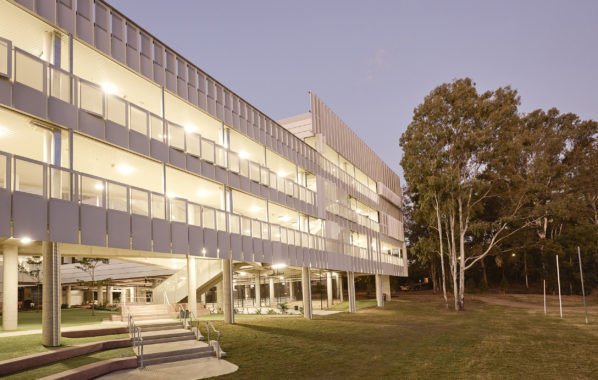 Phil Hindmarsh (Lead Architect) from Hayball presented the Indooroopilly SHS project to our team after receiving a technical presentation from Louvreclad.  The Department of Education brief called for a proprietary cladding system that was robust enough to withstand the unpredictable impacts of a school setting, whilst still being low maintenance, within budget and easy to build.

Our solution was a combination of Polaris Series® and Platinum Series®, a 3mm perforated and solid aluminium plate rain screen cladding system.  Louvreclad Platinum Series® provided the perfect combination of proprietary details and bespoke potentials. This ensured that while the proprietary component met the Department Of Education requirements, the system was also able to be customised and engineered to suit the architectural design intent – a horizontal linear aesthetic that referenced the weatherboards language synonymous with the heritage of schools in Queensland

Initially there was some concern as to the strength of system, leading to the design and fabrication of a full-scale prototype of the Platinum Series®.  The prototype was immediately approved by all relevant stakeholders as it ticked all the boxes in both form and function.

Our team then worked with the Architect to create the architectural specification for the project, mitigating risk for the head contractor and outlining the design and engineering requirements. This included the necessary quality and non-combustible certification required.

Adco Constructions was the successful contractor on the project and with the support of the Architect, Louvreclad was contracted to design, engineer, manufacture and install the Platinum Series® and Polaris Series® 103 solid aluminium cladding system. The scope included Sunscreens, Balustrades, and Sun Hoods.

This undulating, curvilinear façade was finished in Interpon® Surfmist Satin and Matt Powder Coating and has become a critically acclaimed project within the industry since completion. This became another successful Louvreclad project, showing the value that can be added when our team is involved at early design phase.

Lead Architect Phil Hindmarsh proclaims that, “Louvreclad facilitated an outcome that exceeded the Department of Education’s expectations for a buildings cladding system.”